This year the Imagineers have been working on space themed projects. Firstly, they worked on designing a lunar habitat using 3D design software to enter the European Space Agency’s Moon Camp Challenge Competition. While they did not win, the team that made the final shortlist did receive certificates of participation.

The next big project of the year was working towards building a radio telescope for which we secured funding in the form of an Institute of Physics grant, which enabled school to buy a Radio JOVE kit from NASA. Everything has had to be built from scratch, from the 7 ½ meter dual dipole antenna, to the actual receiver itself. The Grove Site Team kindly helped to install this on the C block roof and the Imagineers have since spent several sessions working on getting to grips with the software in order to allow them to make observations of the microwave background radiation, sun spots, solar flares and radio emissions from the storms on Jupiter. All the observations students collect will be fed back through to NASA to become a part of their central JOVE database. This is enabling our students to do real science and work with major players in the world of space exploration and astronomy around the world.

The Imagineers final project for the year has been to build a mobile double cross dipole antenna which can be taken onto the school field, connected to a software defined radio device, and allow the students to track America NOAA weather satellites as well as the Russian Meteor M2 weather satellite. The group have done an amazing job with the construction of this and have been getting some very clear signals during satellite passes. Using a couple of pieces of software students are then able to convert the received radio signal into an image showing what the satellite sees live as it is passing over our sky. Each pass lasts around 15 minutes and the real trick is to keep the antenna trained in such a way as to keep the signal as strong as possible whilst reducing interference. Below are two of the best pictures students have captured so far from the NOAA 15 satellite. 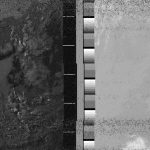 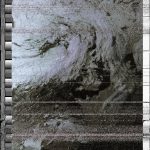