We recently appointed the following students as our Sixth Form Officers following an interview process:

Hollie Bentley, Head Girl and Ed Winfield, Head Boy have been selected to head up the Ambassador Team, some of their responsibilities will include acting as ambassadors for the school, both within The Grove School and in the wider community; they will assist with presentations at key school events and report findings to the Senior Leadership Team.

Megan Matthews has been appointed as Lead Mentor, responsible for identifying people for the Community Responsibility Programme. She is also tasked with co-ordinating the placement of The Grove School students with Sixth Form Mentors, along with identifying new opportunities for Sixth Form involvement within the wider community. 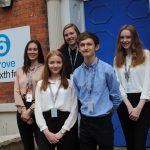 Posted by marchesadmin on 11th July 2019, under Uncategorised